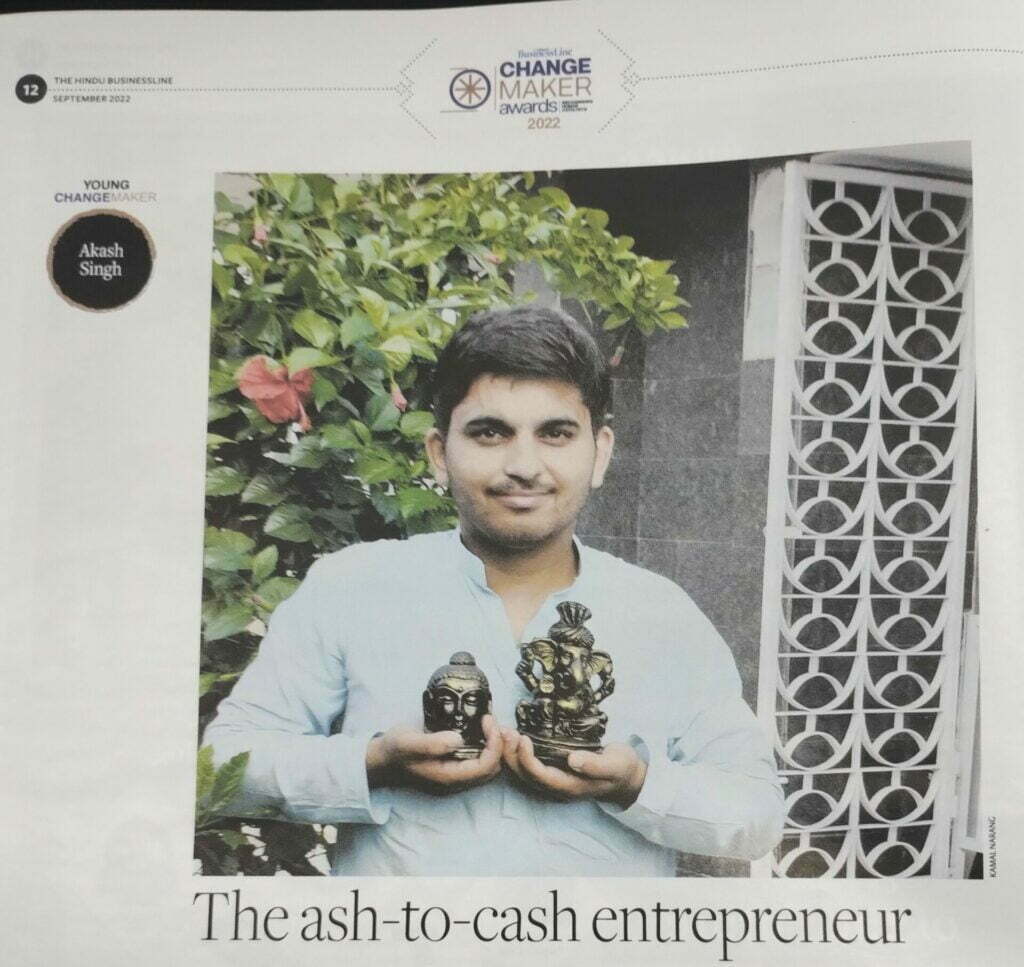 Five women, with the free-end of their saris covering their faces, listen intently to Akash Singh, sitting across the table at the Atal Innovation Centre in Dadri, a two-hour drive from New Delhi, as he explains the “concretisation technology” and use of casts and moulds to make statues.“Hum log raakh se statue banayenge? (We will make statues from ash?) Aur yeh hum apne ghar mein banayenge? (And we can make them at home?),” asks one of them, still in disbelief.

Akash now has a quick chat with his designer and then tells us: “Sorry we are still short of hands. So, my mother is helping me train women from my village.”

A man of innovation Akash already has several innovations to his name, including a self-power generating walking stick, a smart irrigation sprinkler, and a wind harnessing machine.

Hailing from a village near Jewar in Uttar Pradesh, 21-year-old has been an innovator since his school days.“I have tried to solve problems that I noticed around me. For instance, the sprinkler was mostly designed to ensure minimum water wastage and maximum coverage. The wind harnessing machine was to generate energy and so on,” he says.

Constantly on the lookout for innovations, Akash left farming and his native village after class 10. He moved to Gurgaon to pursue a three-year Civil Engineering diploma.

The fateful temple visit
During his diploma days, he was a regular at one of the Manesar temples. It was during these visits that he discovered the extent of water pollution and its impact on the ecosystem. There was waste all around – coconut husk, incense sticks, and ashes… The pollution was causing fish and other aquatic life, like turtles, to die. Birds, which were a regular at the water-body, had stopped coming.

“We approached the temple priest and he told me to come up with a solution. I knew it was difficult; but not impossible,” Akash says.

Racking his brains, he hit up on the “concretisation technology” — a part of his curriculum. “I understood that of all the waste materials, it is the ash from incense sticks that’s causing the most damage. The ash contains chemicals like Toluene, Benzene, and Xylene that are harmful to us as well as aquatic life,” he said.

Ash to paperweight
During his research, Akash discovered the potential of ash as a binding material and decided to recycle the collected ash into artefacts.

“The collected ash is refined. Coconut husk is also converted into ash and then mixed with water in a set proportion to make the artefacts,” he explained.

The journey over 1,000 miles begins with a single step. And for Akash, it started with a humble paperweight. As days progressed more artefacts were designed.

Time to scale up
With over 300 artefacts in its portfolio, Akash’s Energinee is now looking to scale up. Artefacts range from small showpieces to statues, including idols of gods. Its products are priced from ₹300 upwards. Since 2018, the start-up has collected 10,450 tonnes of ash and waste from over 150 temples. It had put up special bins and incense stick holders in some of the temples, but with the Covid breakout, the maintenance of these bins was hit.

If converting waste to wealth was one virtue, utilizing jail inmates, especially undertrials, to do it is another. By doing so Akash is giving a second chance to the prisoners who are otherwise stigmatised and condemned for life, both inside and outside the prison. Energinee trains the inmates to make these artecrafts. It began with Gautam Buddh Nagar District Jail and is now being extended to four more such facilities. According to Akash 46 inmates who were trained in the prison have got jobs upon their release.

Sanjoy (name changed), was a salesman when he was arrested a few years ago, on charges of child marriage (his girlfriend’s family had complained about him to the police). He was 21 years old then and was imprisoned for 17 months awaiting trial. Even as he thought that his life has ended, he learned about efforts by Energinee and got fully involved in it. He says the entry of Energinee in his life is a miracle. It reignited his creative talent when it came to arts and painting. Soon he was a valuable member of the Energinee team. He was found ‘not guilty’ by the court and released. Sanjoy continues to work with Energinee and support his family.

Akash Singh with his mother Neema Singh. The pandemic and the consequent restrictions have temporarily impacted these training efforts. Akash is keen to restart the work and in the meantime, he has begun working with NGOs and others to expand his footprint.

“Right now we are tying up with NGOs where we provide training at some cost; or we train people through our programmes and then give them the option of selling to us, which we market. Or those whom we train go the market themselves, he said. Akash also plans to work on a franchisee model by which people — who have taken training — will collect ashes from their nearest temple, and make the statues and these will then be marketed and sold through Energinee. Self-help groups are also being roped in.

Funding
The start-up is gearing up for its next round of funding around November–December. One round of fund-raise happened from a Germany-based angel investor in 2019. Akash does not reveal the investor’s name or the amount his company received.

“We are self-sustainable at the moment. But would be using the funds for growth,” he said.

Expansion and diversification
According to Akash, plans are now to expand presence and visibility. It has tie-ups with Amazon and plans to elevate its own website. Recently, the company decided to take on the “growing popularity of China-made rakhis” and introduced its own “Soil Rakhi”, which is bio-degradable and made from natural materials like earth. Several potters from Akash’s village were roped in to design and develop these rakhis. The start-up sold 1,500 rakhis in two days and 7,500 rakhis in two weeks.

“My mother, too, decided to help out and started roping in women self-help groups from our village. Proceeds including profits were shared with all. Most of our orders came from the Southern States,” he said.

Right now the focus is on building Ganapati idols ahead of Vinayak Chathurthi. Plans are afoot to develop earthen lanterns and diyas for Diwali.

Energinee’s team strength is eight with some 26 volunteers and interns. The start-up plans to ramp up staff strength too.

Previous innovations like the self-power generating walking stick — which Akash gifted to his grandfather — is likely to be rebooted with more features.

“These items require maintenance and some organizations have expressed interest in funding the invention or upgrade versions of the walking stick. We are looking into it,” he says, adding that scope for India-made offerings during festivals is huge market that can be tapped into. Not only would that provide round-the-year employment for Indian artisans, it would also provide some competition to China-made offerings. For instance, for next year’s rakhi, Energinee plans to start work six months ahead of the festival.